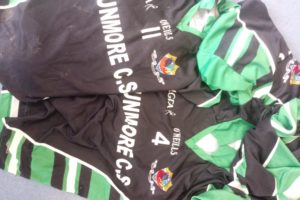 In ideal playing conditions last Wednesday in Dunmore, Strokestown set themselves out as the team to beat. A thrilling game ensued with some strong play and beautiful scoring from both sides. The opponents’ numbers 8 and 11 looked particularly menacing ploughing through our defence for some early scores. This forced us to concede a forward as a sweeper and make some tactical changes in our backline. This seemed to work somewhat and overall in the first half the possession seemed to be mainly in the hands of the Dunmore women.
However, Strokestown were confident in taking their chances between the bars while we seemed to have to work doubly hard for our scores. Nonetheless, the game was tight with three points separating the teams in the opponents’ favour until two unfortunate goals just before half-time gave them the edge.
Serious commendation had to be given to Dunmore on the sheer determination as each player battled until the end with some excellent passages of play and a comeback looked likely as we clawed back to within four points. Unfortunately, Strokestown were not to be caught with persistent changing and swapping of players around the field making it difficult to mark and players weary.
The scoreline allowed Strokestown a comfortable win over our ladies but could be seen as an unfair description as to the match itself. As the saying goes, “nothing worthwhile comes easy” and the strong opposition definitely stretched us and allowed us to identify our strengths and weaknesses on the field. Hopefully, we can use this loss as a learning curve to becoming a formidable team in the rest of the competition.