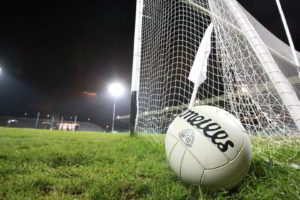 This Monday saw our juvenile boys take to the pitch in their first outing, and they did not disappoint. We were fortunate to have a healthy 25 players travel, a mixture of second and third years. Opening few minutes saw our lads unsettled and gave our opponents false hope as they popped four points over without response. However, we weren’t long finding our rhythm and getting onto the scoreboard. Robert Heneghan and Colm Costello took charge of the shooting, scoring 1-2 and 4 points respectively while Sean Carr took control of ensuring another ball decisively found the back of the net. Half time saw a score line of 2-7 to 7 points in our favour. We still weren’t clear of Glenamaddy and some unfortunate passing and overworking of the ball was to be blamed for this. We were capable of more. Again, we allowed Glenamaddy to take control of the opening of the second half before getting down to work and putting distance between the two teams on the scoring front. Excellent finishing and fabulous support work left their goalie no chance as the ball pounded the net relentlessly another five times. We had a chance to play the majority of our bench and explore positional changes and still the domination by Dunmore continued. Excellent result from the day, we know we have a few things to work on but one thing is for certain, there will be serious competition for places on this team with the talent shown out there today. Final score 7-9 to 11 points. Next game against Balla away next Wednesday. Training will take place this week on Thursday after school until 5.30.