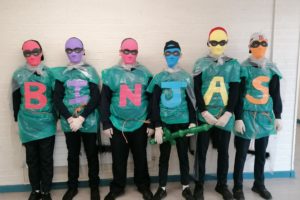 As you will all remember earlier in the year, a group of our 2nd Year boys entered the SEAI One Good Idea Competition with their
creative idea of the BINJA’s. In the battle against climate change, these boys created an original and attention-catching 1 min film along with their mentor Ms.Canny and formulated the plot, costumes (from recyclable materials of course!), drafted in actors from 1st and 2nd Year and produced it all themselves. Special thanks to Barry Murray for his shining performance in the lead role! Their film along with the promotion of their campaign of the 3R’s (reduce refill recycle) throughout the school and community secured their rightful place in the Regional Final in Limerick.  Here the BINJAs film was played on the big screen in the Omniplex and the boys presented their Presentation Pitch discussing all their work and the importance of their campaign. To our delight, the Binja’s did not just qualify for National Finals but came 1st place in the Regional Final which was an incredible achievement considering it was the school’s first time to enter the competition! School closures followed but we are now delighted to announce the National Finals will still go ahead tomorrow in a Virtual format on YouTube at 2 o clock. (Thursday 23rd April)

The event will begin with a short speech from the SEAI followed by the 4 Primary school films and the winner announced.  Following this, the 8 Post Primary winning films from around the country will then be shown and the All Ireland Winner will be announced! The very best of luck to our Binja’s!

We are so proud of all you have achieved and will be tuned in tomorrow to see your amazing film being aired no matter what the outcome! Best of luck to all!

We hope to have a virtual meetup tomorrow at 2 pm for all those involved. Keep an eye on your email for an invite to the online meeting!